Jack in the Box

Be mean. Be mean. Be mean. I whisper to the mirror. My meeting with Marilu is in five minutes and I need to convert my anger into verbal fuel. I contort my face into the position I kept it in as a teenager. I look like a real B-I-T-C-H. Good. I grab my keys and head out the door.

I walk past the blind man who plays with himself during the day and yells at strangers during the night.  I hop over a puddle which, despite California’s severe drought, has been growing bigger and bigger. When I get to the Jack in the Box parking lot, I take a deep breath (Be mean. Be mean. Be mean.) and enter.

Although I’ve never met Marilu in my life, I recognize her instantly. She looks very out of place in her pencil skirt and pristine blouse. Her hair is meticulously curled and blown out to create slight waves framing her round and friendly face. Her skin shimmers with kindness — or is it makeup? Whatever it is, it’s heavenly. Her perfect posture exacerbates the fact that she’s trying not to touch anything around her. When I get to the table she seems slightly relieved to have a neighborhood insider to accompany/protect her.

Had I met her under different circumstances I probably would’ve told her how beautiful I thought she was — but not today.

Before I let her have it, I draw on every fiber in my midwestern being not to smile and say, “It’s so nice to finally meet you.” Because it’s not nice. It’s not nice that her client caused a five car pile-up which resulted in the destruction of my car, my savings (and for a while) my life in Los Angeles. It’s not nice that I had to stop working, writing and doing comedy while I tried to recover from the car accident. It’s not nice that his insurance policy couldn’t cover the $15,000 worth of damages his shitty driving caused. It’s not nice that this pretty and friendly insurance agent had to deal with my anger. It is not nice.

“Oh my gosh, you too!” Her face lights up. “I am so sorry to make you meet me here, but I couldn’t find parking on your street.” Her teeth are just as bright as her being and I grow jealous of her thin arms and tan skin. I begin to search for flaws in her smile, but she quickly switches her face to concern, “How are you, you know, how are you doing?” 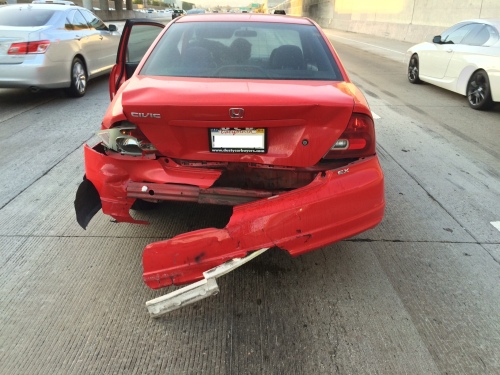 I’d spent the night before practicing an intimidating speech where I demand to be paid for the thousands of dollars of damages this accident has ripped from my bank account. Now was my time to shine. Before I could get the words out I felt it; a tingle. The tingle travels up my nose and into the corners of my eyes. My tongue expands with saliva and I burst into tears.

Despite the salty waterfall of anger and sadness pouring down my face, I decide to launch into my pre-planned speech anyway. You can be intimidating while crying. Right?

“This car acci–” I didn’t finish my sentence because a man interrupts my pity production.

“Excuse me, what are you ladies doing?” He asks.

Marilu instantly straightens up. I could see all of the muscles in her body tensing.

“We’re meeting about something,” I tell the man.

He also has a friendly face, but it’s hard to look past the single tooth jutting out from his lonely gums. I notice he is also missing some fingers. I wonder if they’re with his missing teeth.

“Are you students?” he continues.

I get this question a lot. Partly because I live next to a college campus, and partly because I usually dress like a collegiate rugby player who was just dumped by her girlfriend.

“No, this is an insurance meeting,” I say.

“Health, life, car?” He asks. Marilu silently shifts in her seat. Maybe the subtle smell of urine and cigarettes has reached her too.

“What kind of car do you have?”

“I had a Honda, but it’s gone now,” I dramatically stare off into the distance hoping Marilu will notice my quiet suffering.

“I see. I see. You are very pretty,” the man says to me. He turns his back to Marilu and leans closer to me. “I am very drawn to your eyes.”

My anger softens and I couldn’t help but smile. I work really hard to look like a young, but grieving college student and it’s nice when someone notices. I hope Marilu isn’t jealous.

“Thank you,” I reply while doing my best to look bashful because modesty is attractive. The man flashes his tooth at me and continues flirting.

“If you could have any car in the world which one would you have?”

I don’t even think about this one: “One that runs.”

The man lets out a genuine laugh. “I like that. I like people who ain’t flashy. Where do you live?”

“On this street,” I point out the window. Marilu shoots me a look that I can’t quite read because we just met, but I assume it means SHUT UP.

“I’ll tell you what,” the man pulls up his sagging pants, “I’m going to let you get back to your meeting. But you are very beautiful and I want to buy you a car. Any car you want. You just pick, brown eyes.”

“Okay,” I tell him, “That would be nice. Nothing fancy, though, I wouldn’t want anything to happen to it.” For a moment I am pulled into his fantasy.

“Sounds good, pretty eyes. Imma buy you a car and drop it off at your place.”

His confidence warms my heart, his battered appearance breaks it.

“One-hundred percent. You two beauties have a nice day.” The man puffs up his chest and walks out of the Jack in the Box, taking my fantasy with him. I see him do a small loop around the parking lot, searching for discarded cigarette butts, before wandering on to his next adventure.

“Sorry about that,” I say to Marilu — assuming it wasn’t fun to be the third wheel on my impromptu date.

Her eyes glisten under the florescent lights of Jack in the Box. She looks genuinely sad to be there with me and I am genuinely sad that her job is dealing with angry people like me.

“You have a kind soul,” Marilu says softly. I instantly become self conscious about threatening to sue her a couple of days earlier. Her muscles relax as she stares out of the Jack in the Box window. Outside, my dynamic and smelly neighborhood buzzes with life. The blind people, college students, hipsters, homeless, actors, writers, babies, taco trucks, grocery carts, trash, excitement, sadness and anger, melds into a blurry mess of confusion and car horns.

“Look,” She sighs, “I can’t offer you much, but I could change around some numbers and claim $1,000 for bodily injuries.”

A thousand dollars would barely cover the towing and storage fees from the accident, but mama’s got bills to pay so I accept the money. Marilu hands me a packet of papers which state that my accepting her payment frees her client of any culpability. I sign my name into the bottom of the page while Marilu quietly packs up her suitcase. My unabashed tears splatter across the signature.

I’m not crying because I am sad for my car, I am crying for the time I wasted being mad about a pile of metal. But this new sadness doesn’t last long, it evaporates the moment I step out of that Jack in the Box and back into my neighborhood. A neighborhood I’ve become so intimately attached to after months of being financially quarantined inside its borders. I smell the grease from the fries as the palm trees silently sway back and forth nodding in agreement with how tiny everything is.

Marilu gets into her spotless white car and drives out of the parking lot as I give her a friendly goodbye wave. I turn around and walk back to my apartment, wondering where the next reality check will come from.

9 Comments to “Jack in the Box”