“If you were stranded on an island and could only bring three things what would they be?” I hated playing this game in summer camp. Do your parents count as two things? What kind of outlets does this island have? Do they speak a different language? Will there be boys there? The answers didn’t really matter because I always ended up choosing the same things; my parents, beanie baby collection and stuffed dog, Lucky.

Little did I know seventeen years later (I’m that old!?) I’d be facing the same question, but this time it would go from hypothetical to realistic.

How did this decision come about? I was sitting in the Taiwan office and said, “Hey, wouldn’t it be crazy if I just up and moved here?” The next week I began re-negotiating my contract. It was a fast decision, made on a whim. I’ve spent the last few weeks calculating how I got here and I’ve figured out it was three parts:

1 part: Idiotic argument with a friend.

1 part: New York being a money-suck.

The first two parts aren’t whimsical, so I’ll focus on the third.

C’mon you’ve fantasized about disappearing. Just up and moving to a different country where you didn’t know anyone and no one knew you? 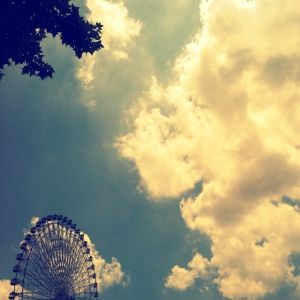 My backyard in Taiwan.

After a sudden and traumatic loss, I began thinking about life a lot.

You see, in New York I was safe. I’d found the perfect apartment and moved in with a perfect roommate. I adopted an adorable dog and began talking about marriage with my boyfriend. Slowly, a road formulated in front of me, I could see the future and it looked much like my childhood: happy and stable. Ah, but there is one flaw in this happy and balanced life, it doesn’t make for an interesting story and more importantly I am Russian.

My Dad told me this old Russian idiom I found to be very true; Russians like to create obstacles in order to heroically over come them. And so, here I am creating an obstacle.

The thing is, I need obstacles! Life is getting too comfortable. I need a push, I need to be scared. The past few months I have been looking at New York through a screen. Staring at texts instead of skylines. Checking facebook instead of faces. I became what I was scared of; a jaded person, pushing through the crowd. Don’t get me wrong, I love New York. MORE. THAN. ANYTHING. But I guess I just wasn’t ready for it. Hopefully stripping myself of everything will give me a little bit of the hardness, the edge, I need to come back and take over the world like I’ve been planning (everyone knows you have to take over New York before you take over the world).

Maybe I’ve lost my mind and am making a big mistake, but at least it’s an exciting one.

In a couple of months I am going to get rid of my furniture, phone plan and balance. I am going to pack some clothing and my stuffed dog, Lucky, and move half way around the world to a tropical island where I don’t know the language or the people. One out of three ain’t that bad, right?

I don’t know what will happen or where it will lead me, but it sure as hell will give me a good story. And isn’t that what it’s all about?

P.S. I originally wanted to title this post, “Suicide Note” mostly to grab your attention (as most things involving suicide do) but also to discuss how I want to end this blog. I have loved this thing more than I should’ve for the years I’ve been writing here. I am proud of it, it’s my artistic getaway, but it’s also been surprisingly stressful.

I have been terrified to press the “post” button every time and even more terrified about what people may think. I’m moving to  Taiwan to focus on writing and submitting to credible blogs and possibly getting my name out there, which is hard when I save all my best for this dinky little personal blog. I was set on ending it (the blog) and disappearing fully, but was advised by someone close to me to rethink. Sorry for the jumbled stream of consciousness here, but what do you think I should do?

5 Comments to “A Quarter-Life Crisis”

Leave a Reply to 30 Before 30 | MARINAvsWriting Cancel reply