My mother covers the camera on our family computer because according to her, “The government is watching us.” Why the U.S. government is watching two retirement-aged Russians, who have yet to learn how to properly pronounce the letter ‘V’, is beyond me. I try not to question my parents’ antics so I don’t run out of things to write about.

The last time my entire family got together was for Thanksgiving and I had an incredible time. So incredible, in fact, I decided I’d had enough incredibleness for the year and would spend Christmas break alone in Brooklyn.

My favorite Christmas dates back to 2005 when my mother had forgotten to go grocery shopping. It was on me to save Christmas a.k.a find food for some very hungry Jews. Luckily, the local Walgreens had Diogiorno.

If you want a clearer image of what Christmas was like in the Shifrin household that year, imagine a pizza commercial. Now replace the smiling family with a russian one and instead of sitting at the table they’re in front of the TV. Oh, and the dad is swearing up a storm because he can’t figure out how to get the Pay-per-view* to work. Not exactly a Miracle on 34th street per se, but it was our Christmas. Oh and by the way, I can believe it’s not delivery Digiorno, I just can.

So when my boss needed someone to watch his dog and apartment, I jumped at the opportunity. A swanky loft in the middle of Brooklyn with an adorable pup who can’t comment on my weight gain? Sign me up.

It was to be the perfect Christmas, no one’s shit to deal with. I wouldn’t need to reassure my 60-year-old father that his ponytail was totally cool, or hear about my mom’s latest voodoo potion guaranteed to make your bowel movements regular while simultaneously increasing fertility (she really wants grandkids). It’s not that I didn’t want to spend Christmas with my family, I just couldn’t find any other time to shave my knee hair.

Let’s be honest, anyone who’s met me knows I am obsessed with my family. But what if you got to have a one-day free pass? No expectations, no parties, no airports, no appearances. Christmas was my free pass. Just me, sweatpants and Peanuts. “No shit!” became my mantra for the week.

And so, Christmas came and I decided to fulfill my Jewish-stereotypes by ordering take out, watching movies and ignoring Santa. 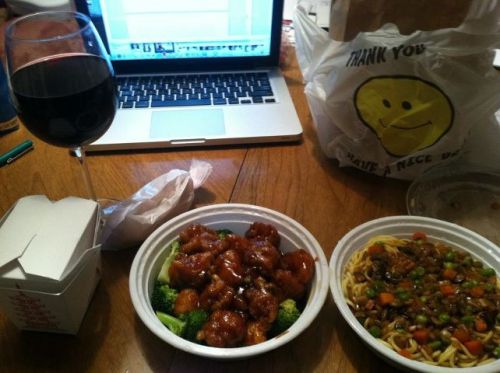 Keeping my health in mind, I decided to walk the 30 yards to ‘Yummy, Yummy’ Chinese Takeout. After all, I needed to exercise before consuming 13,675 calories. With my $12 meal in hand, I proudly walked back to the apartment. I couldn’t wait to devour my dinner for two — for one.

It wasn’t until I ran into a group of 6 kids on the walk back my first pangs of guilt began to set in. They had just gotten out of church and their faces lit up as soon as they saw Peanuts. They huddled around me asking questions, “Does he bite? What kind of dog is he? Will he pee on me?” Soon the oldest of the pack stood up and like a miniature black Moses yelled out, “HEY! Let them go. They have to get back to Christmas dinner.” My heart sank as I thought about the empty apartment waiting for me. I tried to hide the plastic smiley face behind my legs. No shit, Marina, NO SHIT.

I am proud to say it took me exactly 29 minutes to crush two portions of Chinese food although I did share some General Tsao’s chicken with Peanuts. I finished my meal and proudly sat back, I had succeed in my goal of gluttony in solidarity. 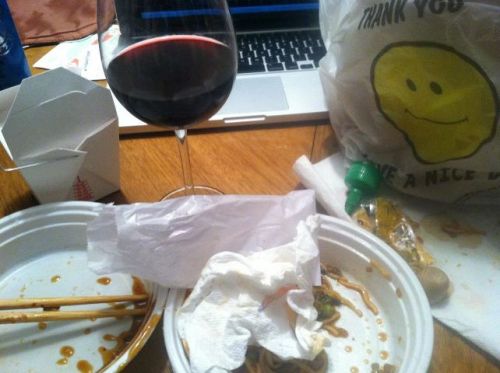 Forty five minutes later, I was lying in the fetal position and had broken into a cold sweat. It turns out, my stomach is not made to handle two portions of deep-fried grease. It was at this point, I wished more than anything I had my mom’s strange potions and my dad’s absurd antics to distract me from the culinary masochism I had brought upon myself. As if my physical pain wasn’t enough I learned something else about chinese food: it’s not made for dogs stomachs either.

Without getting into too much detail, my “No shit!” Christmas mantra had to be amended after all.

*For my brother’s teenage friends reading: pay-per-view was sort of a hulu-like service back in the day. Oh, and don’t do drugs

3 Comments to “Christmas is Cancelled.”