“I love you,” he said. There is a point in the night where Brooklyn gets really quiet and really beautiful. It’s at this point everyone on the street falls in love with whatever is closest. For Gio, the closest whatever was me.

When I was 16 I got dumped for the first time. Little did I know, 6 years later, that same boy would show up at my doorstep and tell me he loved me.

I parked my mom’s minivan behind his mom’s minivan and checked my eye makeup. It’s not like I wasn’t ready for my first “we need to talk” experience.

We’d been dating for two months, meaning we had to make the decision every 16-year-old couple faces in their second month of a relationship: break up or have sex. Ever since my mother so kindly informed me she was extremely fertile and got pregnant after the first try, I decided to abstain from sex until I was dead. So break up it was — unfortunately he beat me to the punch.

Gio was a high school dweeb’s dream. When we first started hanging out he burned me a CD of Wilco’s Yankee Hotel Foxtrot and I knew then and there he’d be my boyfriend. For two months of my chubby, acne filled, teenage existence I felt a like a rockstar. Somebody liked me.

We both sat, staring out the windshield of his mom’s green minivan. It was pretty quick and painless. I tried to react to his words but the clichés kept getting caught in my throat. No sooner had he dumped me, then I was back in my separate minivan listening to the CD he had made.

The first song started, I marinated in the irony. My nose began to tingle and in an act of emotional defiance, I took a deep breath and stopped my tears. Two weeks later I found out he had a new girlfriend and she too, now possessed a burned copy of Yankee Hotel Foxtrot. But at that moment the lyrics infiltrated my car:

My necessity to “win” every relationship, and his adoration for crazy women re-crossed our paths in adulthood — and by re-crossed, I mean collided them resulting in a fiery crash. But I’m not there yet, right now I am at the point of the story where I was swept up in his profession of love. My ex-boyfriend from age 16 was reversing all my teenage insecurities under a street lamp in Brooklyn.

Not knowing how to react, I retreated to my apartment and did what any girl my age would do; I called my best friend.

“Hell-Oh,” Vladimir’s cheerful voice said on the other end (I love the way my dad says ‘hello’). After quickly giving him a recap of what had happened, my dad gave me his stock response: “Well Marina, follow your heart”. This is his response to every question from what should I eat for lunch, to should I tell someone I am in love with them.

“Okay, Thanks Oprah. Can I talk to mom?”

“Hellllooooo?!” My mom has more of a confused yodel-like greeting on the phone. I gave her the rundown and in true Olga Shifrin fashion, my mom told me the quick n’ dirty, “He is not Jewish, he is not a doctor, you do not love him.” Useless.

He was on tour with his band in NYC for the third time this year. We had 9 days to decide what to do. After a game of will-they/won’t-they emotional ping pong I made my decision. Now I just had to tell Gio after his show. 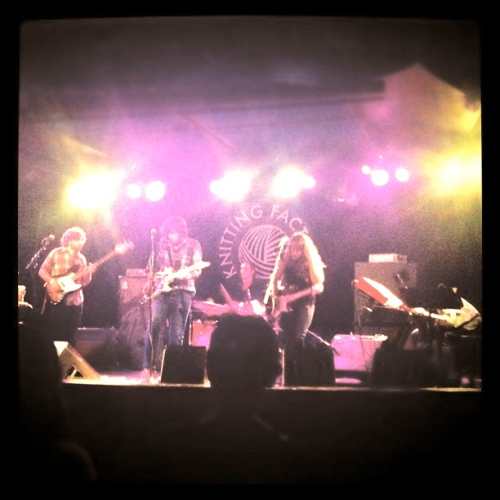 Then Hurricane Irene (headlines) hit. Before I knew it, he and his band were on their way to Maine to escape. I was snapped back to reality; this wasn’t love, it was boredom. Then came the email:

“I care about you so much. I love your sparkling eyes, sweet smile, and the oddity that you are…” I was complimented and I was re-hooked.

I forgot about my fear of commitment, ignored the fact it would be a long distance relationship and he didn’t reach my strict height requirement. It was romantic, it was exciting and it was happening. The band was back in town two days later and I made my move as soon as we had a moment alone.

His eyes dropped to the ground and the flirtatious fixation was broken, I knew the answer before he even said it.

No sooner had he dumped me (for the second time), then I was back in my separate apartment thinking about the CD he’d made 6 years prior. That same damned Wilco song played in my head, “I’d always thought that if I held you tightly. You’d always love me like you did back then. Then I fell asleep and the city kept blinking. What was I thinking when I let you back in?” I was living the very same clichés musicians implanted in their songs for teenagers to make out to.

My nose began to tingle and in an act of emotional submission, I took a deep breath and started to cry. I cried for a long time and I cried loudl—STOP. What are you doing? Are you feeling bad for me? Whoa, let’s back it up a bit:

I moved to New York because it’s the only city crazy enough to inspire me to write. And that’s exactly what happened here. Sometimes inspiration needs you to make foolish decisions based on emotions, sometimes inspiration hurts, and sometimes it leaves you in tears. But one thing inspiration never does, is leave you without a good story. For two weeks of my mundane, adult-acne filled existence I felt like a rockstar. Somebody loved me. And everyone knows love and heartbreak always make for a good story.

Lesson #19: Do not make ANY decisions about a boy when he is holding a guitar.

6 Comments to “Big Girls Do Cry”